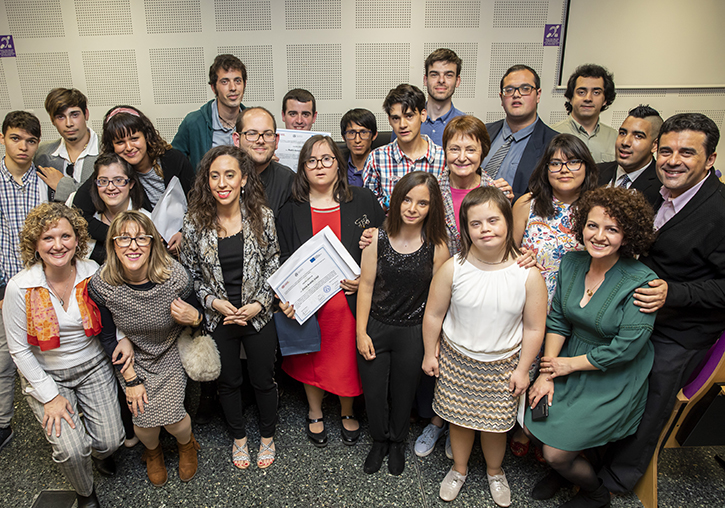 The 18 students of the course of Fundación ONCE with the Principal Maria Vicenta Mestre, teaching staff and contributors.

18 students with intellectual disabilities have graduated in a course for employment training of the Universitat de València. This course was created thanks to a programme financed by the Foundation ONCE in collaboration with the European Social Fund to improve the labour insertion of young people with this type of disability.

The course is entitled “University employment teaching programme for young people with intelectual disabilities-UNINCLUV” and finished on 25th May. The Principal of the Universitat de València, Maria Vicenta Mestre; the director of the Programas con Universidades y Promoción del Talento Joven of Foundation ONCE, Isabel Martínez; and the professor and co-director of UNINCLUV, Vicenta Ávila. Representatives of the students and the families have also taken part in the event.

“This event is a recognition to the work of professors and students, to those who have come to the Universitat de València to be trained. This university is proud of supporting you in this process of training and inclusion, which is a social commitment that we took over many years ago and we will keep on working on it.

The objective of UNINCLUV has been to develop the student’s necessary abilities to increase their employability make inclusive experiences more common within the university community.

“We are the first students with intellectual disabilities that have carried out a course in the Universitat de València,” pointed out Carla and Iván, representing the group of students.

Families have highlighted the importance of this training strategy to make the boys and girls feel “a university student”, “an experience that has helped them to be independent and responsible” and, in short, “an opportunity for their inclusion in the labour market’’. They also referred to the need of work in the education system to end with the obstacles thought initiatives and actions such as the Foundation ONCE program and the participation of the Universitat de València. “Things like this are what will change the world”, they affirmed.

The degree is one of those launched by several Spanish universities as part of the “Unidiversidad”, which pretends to improve training and access to employment for young people with intellectual disabilities, who represent 40% of all young people with disability and who have greater difficulties in finding work. The program also aims to give this group the opportunity to experience the university environment.

In her speech, the Director of  Programas con Universidades y Promoción del Talento Joven of Foundation ONCE thanked the "active involvement" of the Universitat de València in UNINCLUV and highlighted the "extraordinary" work of the academic institution. "We are in the most inclusive university in Spain", he added.

In this regard, Professor Vicenta Ávila stressed that the Universitat de València, through the Unitat per a la Integració de Persones amb Discapacitat, signed up at the General Foundation of this institution, is the Spanish university with the highest number of students with disabilities: each year has more than one thousand enrolled.

The students have had the support of the team of the  Unitat per a la Integració de Persones amb Discapacitat of the Universitat de València,  directed by Asensi with the support of the manager of the General Foundation, Cristóbal Suria, and have carried out internships in dependencies of the Fundación LLuís Alcanyís of the Universitat de València and of the university itself, Plena Inclusión Comunidad Valenciana, AVAPACE, IVASS and ISS Facility Services S.A.

The University de València has also participated in the program, the Physical Education and Support Service through its inclusive sports section, the Libraries and Documentation Service, the Faculty of Psychology and other foundations. 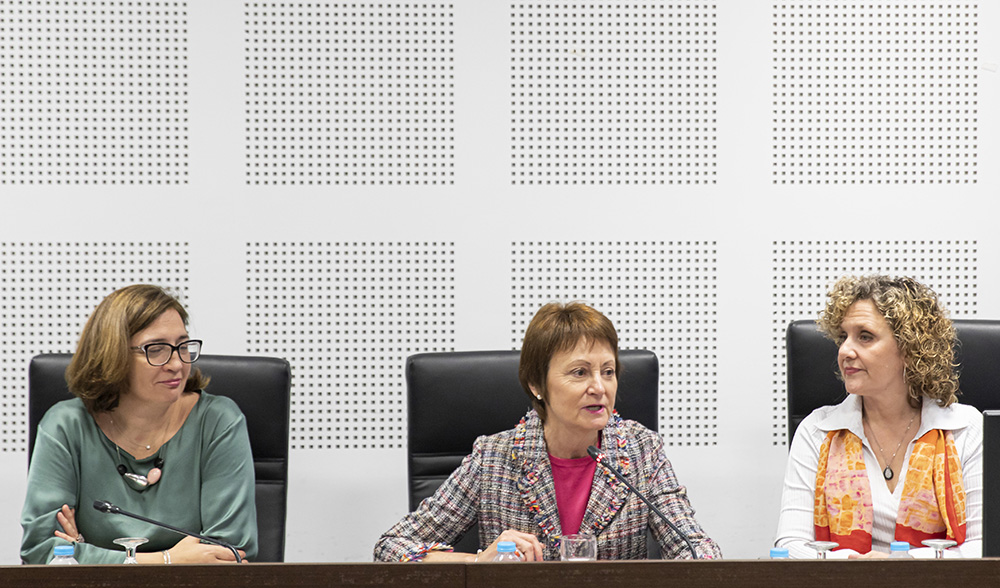