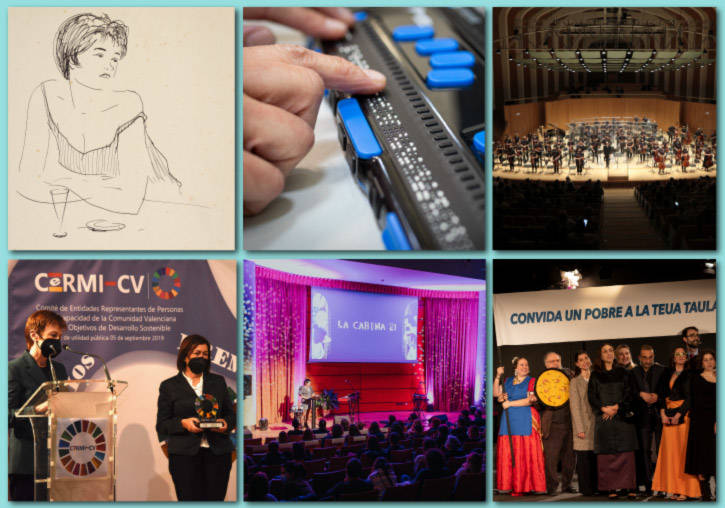 Collage of different moments of the Foundation activities in 2021.

The General Foundation of the Universitat de València (FGUV) has published the Annual Report for the financial year of 2021, which highlights the efforts of all its services in the recovery of activities after the pandemic year, doubling the actions in culture, formation, employment and diversity to nearly 900, a similar figure to that of 2019.

In cultural action alone, around 350 activities were carried out, of which 131 belong to the Musical Activities Department; 23 to Performing Arts; 19 within the framework of the Valencian Archive of Design; 52 to the Cinema Club; 28 carried out by the Martínez Guerricabeitia Collection; 12 exhibitions; 24 congresses, conferences and debates of the Cultural Observatory; 43 in Heritage, and 16 within the Voluntary Work Programmes.

Within this section the 25th anniversary of the Philharmonic Orchestra of the Universitat de València stands out with a special activities programme such as the celebration of extraordinary concerts at the Palau de les Arts where the young members of the University orchestra played together with the Orquestra de València and the Cor de la Generalitat Valenciana, and as a culmination, performed the Opening Concert of the academic year under the orders of its three conductors: Cristóbal Soler, Hilari Garcia and Beatriz Fernández.

In addition, around 17,000 people have enjoyed live all the musical activities of the General Foundation (despite the Covid-19 restrictions still in force in 2021) offered by its own groups (Orchestra, Orfeó, Choral School, Choral Club and Colla de Dolçaines), the Music Club and the Serenates of La Nau Summer Festival.

In Performing Arts, stands out the premier of three productions: two from ASSAIG-theatre Group of the Universitat de València: La benvinguda-açò és el que hi ha, a theatrical text that had to transformed into an audio-visual due to the pandemic situation; Convida un pobre a la teua taula, the first complete theatrical adaptation of Berlang’s film on the Valencian film-maker year; and the show Abans de la llum of the UV Dance Group.

Also noteworthy are the new funds that have been incorporated to the Valencian Archive of Design: 522 projects of Valencian interior designers contributed by the Association of Interior Designers of the Comunitat Valenciana; the donations of the work of Xavier Bordilis, José Juan Belda and Pepe Benlliure; plans and drawings of José Martínez Peris from the legacy of Manuel Lecuona; part of the personal and professional archive of Lola Castelló and Vicent Martínez about Punt Mobles; the finds of the Martínez-Medina family; and a collection of podcasts of the researcher Mariana Salgado for her work Diseño y diáspora (Design and Diaspora). Furthermore, more than 1,700 files with information of the Arxiu fund have been digitised. They are available in web www.uv.es/avd.

In terms of audio-visuals, there have been two major Valencian film events: the Nits de Cinema al Claustre with the cycles Las fronteras de la ficción and Berlanga y la comedia; and the International Medium-length Film Festival La Cabina, that in its 14th edition screened works from 13 different nationalities and was watched by 7,500 spectators.

In terms of exhibitions, of the dozen of projects inaugurated last year the following stand out: the centenary of the Universitat de València Publication Service with the exhibition 100 anys fent libres (A 100 years making books), the macro-exhibition Mujeres y resistencia (Women and Resistance) at the Sala Estudi General which narrated the history of the republican València through the photographs of Luis Vidal; the spectacular display of sculptures by the French artist Julian Opie at the Sala Acadèmia, the cloister of La Nau and the Plaza del Patriarca organised by the Hortensia Herero Fundation; El temps suspés (The Suspended Time) by the photojournalist Germán Caballero that documented with images the reality of the camps for Palestinian refugees in Lebanon, and La anguila (The Eel) by Paula Bonet, the Catalan artist's most heart-breaking artistic and literary work.

In terms of the conferences and debates, the Escola Europea de Pensament Lluís Vives organized around thirty activities including a keynote lecture by former Spanish Prime Minister Felipe Gonzáles, through the European Documentation Centre of the Universitat de València. On the other hand, the Cultural Observatory offered 24 seminars, workshops, conferences and colloquiums. In some cases, the activities were online in a hybrid format.

Additionally, in terms of formation, the General Foundation of the UV organized around 130 activities such as cultural courses (music, performing arts, cinema and art); UVgandia programme with the Universitat d’Estiu (UEG), postgraduate corises, Unimajors, Universitat d’Hivern, workshops, courses, conferences...; the Universitat de València summer school with the La Nau Menuda and La Nau Jove; and the training for Employment programme of UVocupació with 14 courses, 1,180 places and 1,105 enrolments.

Also, a branch of the General Foundation is dedicated to providing university services through different programmes, such as Alumni UV, which carried out 26 activities and in 2021 launched the “Alumni Community” initiative to attract and retain members with two proposals with different advantages: Basic Alumni and Premium Alumni. The European Documentation Centre offered 24 activities including the organization of the Las razones de Europa cycle in the frame of the Escola de Pensament Lluís Vives and the Desembre Europeu that celebrates academic, cultural and leisure activities at the end of the year with the objective of disseminating bringing the concept of Europe closer to the university community and society.

Regarding the UVocupació activities, a service of counsel, orientation and accompaniment for the employability of the students of the UV and its graduates, carried out three programmes to improve the employability: Inserta which its aimed to the undergraduate studies with less impact on integration; Capacitas and Col·laborAcció, with the support of UVdispacitat, for the labour integration of university students with disabilities; and Shadowing, a programme for mentoring students of official master’s degrees. Additionally, in December it launched a new employability programme for masters, Promou-te, in collaboration with the València City Council, which is being carried out in 2022.

Also, in 2021 UVocupació offered nearly 1,800, its data base registered 4,227 job seekers and 287 employer companies. It also organized around ten employment and entrepreneurship forums, a day for the graduates in the field of sciences at the IFIC and a talent challenge, TALENT, at the Faculty of Law.

On December 3, the specialized area in integration of people with disability was recognized by CERMI Comunitat Valenciana with the CERMI-CV Award of Social Action for the promotion and job integration of the university students with disabilities. This award was received by the rector of the Universitat de València Maria Vicenta Mestre, accompanied by the director of the service, Marisa Quintanilla, at an event organised at the ONCE headquarters as part of the Day of People with Disabilities.

The UVdiscapacitat service has, once again, broken the record of students with disabilities who attend university studies with more than a thousand registrations.

UVdiscapacitat has five programmes or areas that offer services to students, teachers, investigators, and administrative and services personnel of the Universitat de València, and in 2021 carried out around 5,000 counselling actions and 545 actions in direct attention to PDI and PAS.

Continuing with the inclusion section, the General Foundation handles, from the Universitat de València, the University Centre for Diagnosis and Primary Care (CUDAP) that last year helped 171 families, the highest number to date.

All of this took place in a post pandemic context of recovery despite the restrictive situation imposed by Covid-19. 2022 foresees an even more optimistic outlook, as according to this year’s Action Plan, the Foundation will implement more than 120 programmes.