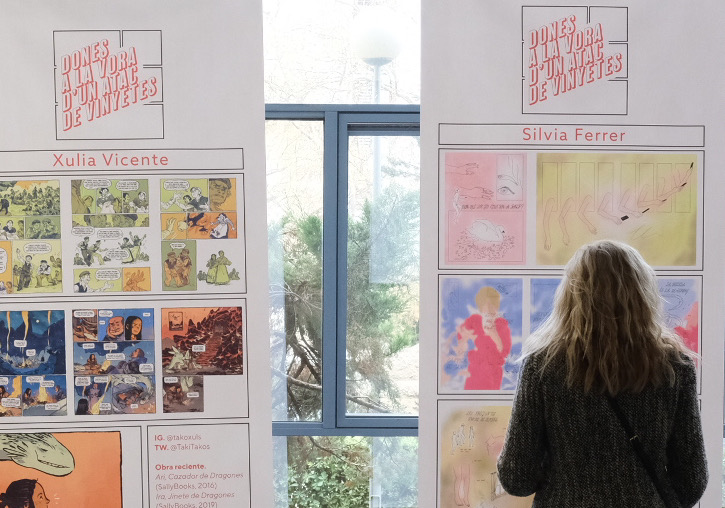 The exhibition ‘Dones a la vora d'un atac de vinyetes’ (Women on the Verge of a Comic-Book Attack) is a look at the new generation of female comic authors who, from the Valencian Community, are actively renewing the ninth art. It has been organised by the Office of the Vice-Principal for Culture and Sport through the Comic Society and with support from the Chair of Comic Studies Foundation SM-Universitat de València, and it will be on display at the Faculty of Geography and History of the University of Valencia’s Blasco Ibáñez Campus until 23 April.

The showing was presented this morning with the participation of María Vicenta Mestre, Principal of the University of Valencia; Ester Alba, Vice-Principal for Culture and Sport; Josep Montesinos, Dean of the Faculty of Geography and History, and Adela Cortijo, head of the University Culture Service and one of the exhibition’s curators.

Female authorship in comics, which has been silenced and forgotten for decades, is now playing an important part. Especially thanks to a young generation that is approaching the language of comics from new perspectives and which is been recognised nationally and internationally with awards as important as the ‘Premio Nacional del Cómic’ (National Comics Award).

The exhibition promotes discovering the work of these female authors by showing the latest creations of ten women who work on everything from fanzines to international publications. Anabel Colazo, Silvia Ferrer, María Herreros, Amelia Navarro, Ana Oncina, Luna Pan, Ana Penyas, Laura Pérez, Núria Tamarit and Xulia Vicente are examples of the wide stylistic and thematic diversity that is being proposed from Valencian comics which currently lead the national scene. Lecturers Adela Cortijo, Noelia Ibarra and Álavaro Pons, from the University of Valencia curate the display.

Both, the Principal and the Vice-Principal for Culture expressed satisfaction at this gender-perspective exhibition being the first of the ‘Culture on Campus’ programme, which aims to spread the University’s cultural activity to all campuses. In this sense, they reminded that the ‘Activa’ calls, which aim to stimulate creativity within the university community, were opened a few weeks ago. They also thanked Manuel González, the delegate of the principal for students, for his collaboration in implementing this initiative.

María Vicenta Mestre added that this exhibition’s theme contributes to raising awareness of the current role of women in comics, a world where their presence has historically been a minority and where they have been relegated to the background. ‘Inclusion and equality are values of the University of Valencia that we also try to show through art. I always say that I wish that one day it will no longer be socially necessary to claim these values’, she concluded.

On behalf of the curational team, Adela Cortijo explained that the title of the exhibition (which is a reference to Almodóvar’s film ‘Women on the Verge of a Nervous Breakdown’) reflects that women are fortunately no longer ‘on the verge’ in the world of comics, but have a ‘diverse and plural’ leading role. She also highlighted that it was a very male-dominated field until the 80s.

Moreover, Dean Josep Montesinos stressed the importance of continuing to reclaim the already-achieved female rights as many are still being denied, even violently, as in some recent incidents. Finally, he referred to ‘Culture on campuses’ as an ‘extraordinary project that will contribute to increasing collaboration with ‘La Nau’, a centre that has always been open’.

The exhibition is currently on display at the Faculty of Geography and History and will subsequently be shown at all University’s campuses.