The exhibitions have opened this Friday 11th February, International Day of Women and Girls in Science, in the Senate of La Nau, with the interventions of the principal, María Vicenta Mestre; the vice-principal of Culture and Sport, Ester Alba; the dean of the Faculty of Geography and History of the Universitat, Josep Montesinos; the director of the Department of Prehistory, Archaeology and Ancient History, Teresa Orozco, and two of the commissioners of the exhibitions: Tina Badal and Emili Aura. The event was attended by the institutional representatives of the Universitat and a large public attendance.

The principal highlighted that “through these exhibitions, the Universitat de València contributes to the cultural life of the city, at the same time it recognises the institution’s people who contribute to society with their research”. On this point, she has remembered that the Valencian archaeology is one of the most important in Spain, with very important figures formed in the Universitat and a great tradition. In fact, the Universitat the València founded the second chair of the State in 1905.

The exhibition, curated by Tina Banal and Yolanda Carrión, is divided into three sections. One of them is dedicated to the history of the laboratory, highlighting the most important milestones that have occurred, which are a reflection of the political and social evolution, as well as the academic and scientific achievements of its members. In 1930, Olimpia Arocena was the first professor at the Universitat de València, in the Archaeology Laboratory, and with her the way was paved for women’s integration in the academic world.

Scientific achievements in the section dedicated to research, where a journey through the History of Humanity is proposed from the point of view of multiple findings and work lines. There are also original archaeological pieces of great interest on display, some of them for the first time, coming from contributing institutions and museums. Among them, the Neanderthal teeth from Cova Negra (Xàtiva), the human bones with marks of cannibalism form the Coves de Santa María (Castell de Castells) or the cupper tools from La Vital (Gandía), which are the first evidence of metallurgy in Valencian lands.

Laboratory members have worked at more than 250 archaeological sites, either as excavations managers or as specialised researchers. That work will be shown in the exhibition with an interactive map that will be accessible from visitors’ phones to the information generated at each site, as well as offering links to publications or to sites’ websites. This database will doubtlessly be a tool for scholars and for the general public interested in archaeology heritage, and it is available at: https://arqueo.uv.es/expo100/

Finally, the third section shows the Laboratory as educational institution, being one of the of its founding principles, in addition to promoting transmission and dissemination of the generated knowledge, as well as respect for cultural heritage.

The exhibition “Dels cronistes al carboni 14: un viatge per l’arquologia valenciana a través dels llibres” invites visitors to embark on a journey through Valencian archaeology with the aid of 61 works that mark, in general terms, the process of formation of this discipline. The exhibition, organized by the Vice-principal of Research, the Department of Prehistory, Archaeology and Ancient History and the Historical Library of the Universitat is curated by the professors Ferran Arasa i Gil, Emili Aura Tortosa y Consuelo Mata Parreño and it can be visited in the Duc de Calàbria room at La Nau until 1st May. The exhibition includes a selection of the funds held, for the most part, in the Historical Library, but also from other libraries of the Universitat de València and the Prehistory Museum of Valencia.

Among the selected works, there are examples from the 16th to 20th centuries that guide us through time, since the first testimonies provided by historians and travellers in the 16th century with the first mentions of inscriptions, monuments and numismatic and sculptural discoveries from the Roman period, to the beginnings of Valencian scientific archaeology in the 20th century.

The tour begins with emblematic works such as the General del Regne de Valencia by Pere Antoni Beuter, printed in Valencia in 1538, or the first specialised work dealing with antiquities, the Diálogos de medallas, inscripciones y otras antigüedades (Tarragona, 1587) by the archbishop Antonio Agustín Albanell.

In the 19th century, on the basis of geological studies, prehistory developed with the first excavations in caves and settlements. In this field, the work of Juan Vilanova and Piera, whose illustrated work Memoria geognóstico-agrícola y protohistórica de Valencia (Madrid, 1893) is included in the exhibition, stands out. The publication of works related to the origin of humanity led to discrepancies about its origin and evolution. One of the pieces on display is the first edition published in Spain of Charles Darwin’s work, El origen del hombre: la selección natural y la sexual (Barcelona, 1876). The Universitat de València became a point of reference in the dissemination of evolutionisme, with prominent figures such as Rafael Cisternas Fontseré, professor of Natural History, and his disciple Eduardo Boscá Casanoves. In the second half of the century, the first Valencian associations dedicated to archaeology were born, such as the Valencian Archaeological Society.

In the first decades of the 20th century, scientific archaeology was consolidated, and the first Valencian institutions dedicated to archaeological research were founded, such as the Archaeology Laboratory of the Universitat de València (1921) and the Prehistory Research Service of the Diputació de València (1927). Several works by de Pere Bosch Gimpera, Julio Furgús, Roque Chabás Llorens, as well as the Hispanists Pierre Paris and Eugène Albertini. Moreover, there are on display several works by the professor LLuís Pericot, who joined the University in 1927 and with whom prehistory studies were introduced and the first archaeologists’ promotions were created; and some of the works by Miquel Tarradell, with whom archaeology studies were consolidated at the Universitat and the journal Papeles del Laboratio de Arqueología de Valencia, thus initiating the development of scientific archaeology at our university.

At the end of the tour, it is shown the first article of technique of carbon-14 dating in Valencia, which appeared in the publication Archivo de Prehistoria Levantina in 1961 and was written by the pioneer in Spanish archaeology Josefa Menéndez Amor and her teacher Frans Florschütz, Resultado del análisis polínico de una serie de muestras de turba recogidas en la Ereta del Pedregal (Navarrés, Valencia). 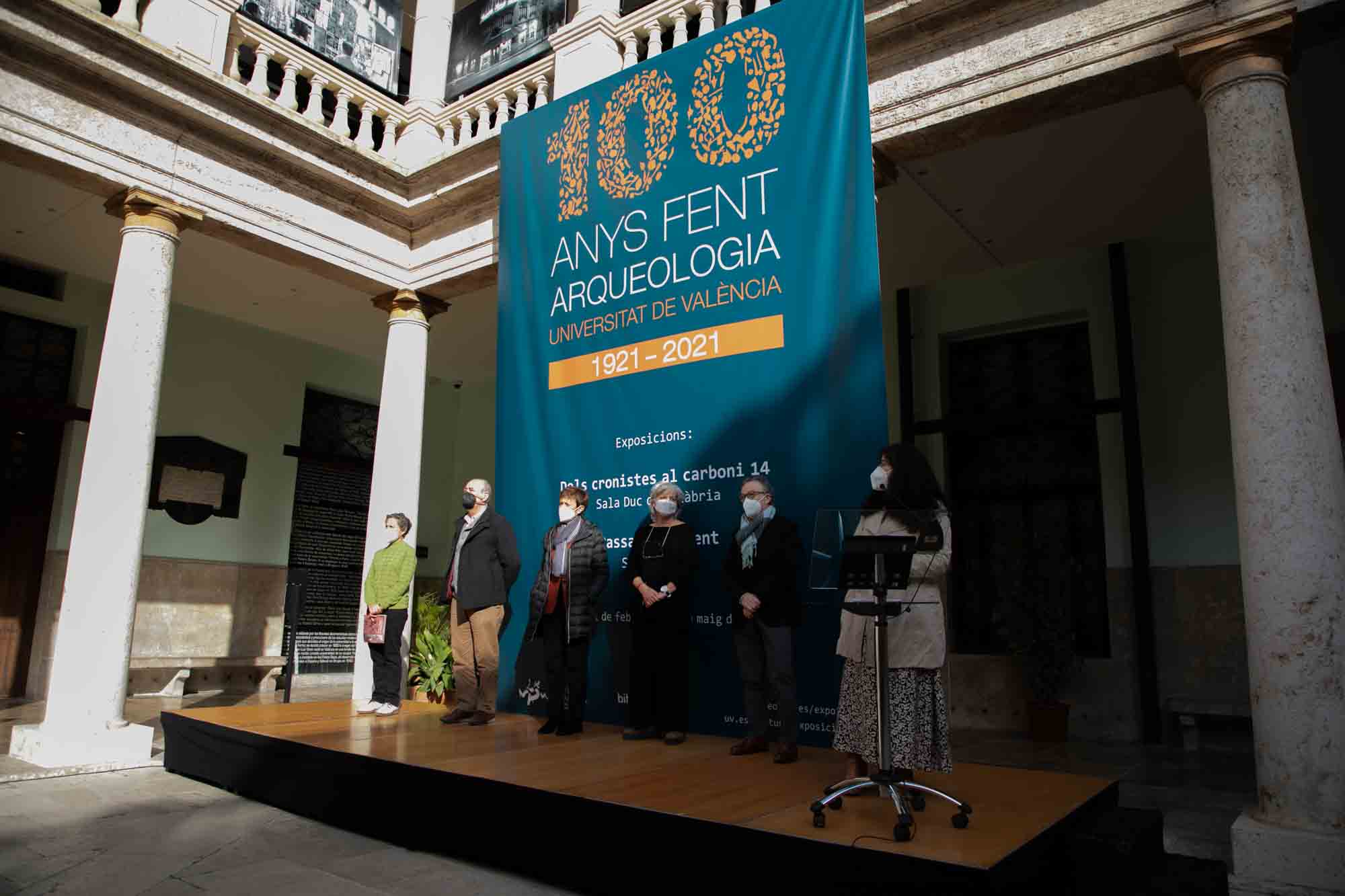