Three researchers from the ICMol, honoured with the awards of the Royal Spanish Society of Chemistry 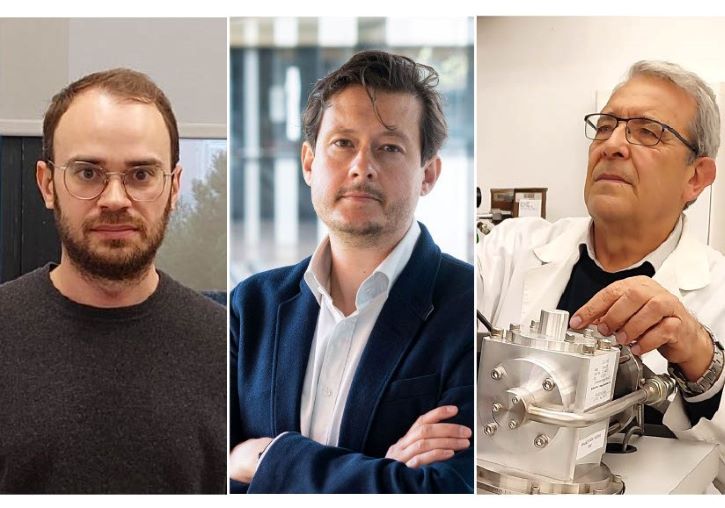 The annual awards of the Royal Spanish Society of Chemistry have honoured the work of three researchers from the Institute of Molecular Science (ICMol) of the University of Valencia. Francesc Lloret –recognition for a distinguished career–, Carlos Martí –award for research excellence– and Joaquín Calbo –young researcher award– thus reinforce the position of this institute as a research centre of excellence in Spain.

In the case of Professor Francesc Lloret Pastor (Pego, 1954), the award is given for a fruitful research and academic career that has accumulated more than 600 publications in scientific journals and multiple awards, such as the National Prize for Research in Inorganic Chemistry from the Royal Spanish Society of Chemistry itself (2005) or the Catalan-Sabatier award (2018) from the French Chemical Society after an intense relationship with groups from that country. In addition, he is an honorary doctor from the University of Bucharest (2014) and since 2014 a member of the European Academy.

With a degree and a PhD in Chemistry from the University of Valencia, Lloret went through different stages as a postdoctoral researcher, including one with Professor Olivier Khan at the Université Paris-Sud in the second half of the 1980s. While starting his work as a professor in Valencia, he charted his own path as a researcher developing a rational synthetic approach to designing and creating molecular-based, multifunctional magnetic materials.

His work in the area of Coordination Chemistry has been considered key in the foundation of the so-called Molecular Magnetism, which in recent decades has been constituted as a European research space embodied, for example, in the birth of the European Institute of Molecular Magnetism (EIMM). In fact, the EIMM arose from the MAGMAnet initiative, launched by the ICMol as a multidisciplinary network of excellence, awarded in 2008 as the best European knowledge development project by the regional government of the Valencian Community.

Lloret is the main researcher in the Coordination Chemistry group of the ICMol, which integrates a dozen permanent researchers. In addition, he has contributed to the creation and consolidation of other Spanish research groups in molecular magnetism and to the training of students from all over the world in this field. In addition, he is one of the most internationally cited chemists.

The second of the ICMol researchers recognised by the RSEQ is Carlos Martí-Gastaldo, leader of the Functional Inorganic Materials Team (FuniMAT) and twice awarded by the European Research Council with the prestigious ERC Grant for two of his projects, first in its modality Starting Grant (2016) and recently with the Consolidator Grant (2022).

Martí-Gastaldo graduated with an extraordinary award from the University of Valencia and soon began working on Coordination Chemistry and Molecular Magnetism in the group led by Professor Eugenio Coronado, founder and current director of the ICMol, and Professor José R. Galán-Mascarós with whom he completed his doctoral thesis, defended in 2009. The following year he began a decisive stage at the University of Liverpool, where he spent three years as part of Professor M. J. Rosseinsky’s team, before starting his career as an independent researcher, with the support and funding from the prestigious British Royal Society through its University Research Fellowships.

This category of “excellence in research” recognises the value of research work in the last 5 years in any area of chemistry, something that reinforces the prestige of the recognition.

In 2014, Martí-Gastaldo returned to the Institute of Molecular Science as a Ramón y Cajal researcher to lead the design of porous materials of the Metal Organic Frameworks (MOFs) type, one of the strategic lines of the ICMol as María de Maeztu Unit of Excellence and main objective of investigation of his group (FuniMAT). Martí-Gastaldo is currently the guarantor of the centre’s second María de Maeztu project and one of the two coordinators of the institute’s strategic line of molecular biomaterials design, at the University of Valencia Science Park.

In addition, some of the technologies and materials created by his group have led to the birth of two spin-offs: Porous Materials for Advanced Applications S. L. (2018) and Porous Materials in Action S. L. (2021) to accelerate the transfer of the results developed by his equipment in products and services linked to MOFs.

The third of the winners, Joaquín Calbo Roig (Alcoy, 1988), graduated in Chemistry from the University of Valencia with an extraordinary award and a record that allowed him to start as a researcher, first at the Institute of Chemical Technology (ITQ-CSIC) under the supervision of Professor Germán Sastre and later with Enrique Ortí, professor at the UV and leader of the Theoretical Chemistry in Molecular Materials group at the Institute of Molecular Science.

Under the academic direction of Enrique Ortí, Calbo completed the master’s degree in Theoretical Chemistry and Computational Modelling, which has the Erasmus Mundus seal of the European Union and allowed him to carry out stays such as the one that took him to the Università degli Studi di Perugia together with Professor Filippo de Angelis. Later, he began his doctorate in the theoretical study of electroactive materials, directed by Ortí, with a scholarship for University Teacher Training (FPU), and made a stay at the Université Pierre et Marie Curie with the researcher Julia Contreras from the prestigious CNRS institution.

Calbo defended his thesis in 2017, for which he obtained the Award for Outstanding PhD in Chemistry (2018) and the first honourable mention in the NANOMATMOL awards for the best doctoral thesis presented in 2017. Since that year, he has participated in the scientific excellence program Prometheus and has completed a two-year postdoctoral stay at Imperial College London with an APOSTD grant from the Valencian Government under the supervision of Professor Aron Walsh. He currently has more than 70 publications in chemistry and materials sciences, and is the main researcher of several national and regional projects focused on the design of next-generation porous materials for energy storage and conversion.

File in: Universitat i societat , Recerca, innovació i transferència , Química

The professor of Parasitology Santiago Mas-Coma, new member of the Royal National Academy of Pharmacy