The rector meets with the new Regional Minister for Universities 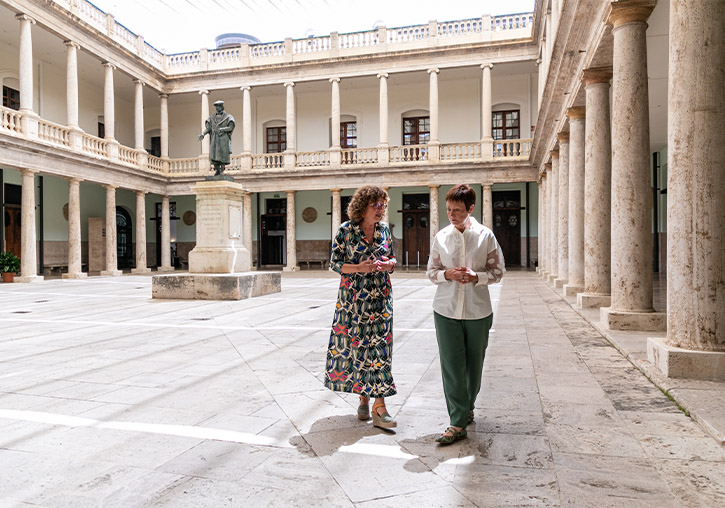 Photo of the meeting at La Nau

After taking office, the Regional Minister for Innovation, Universities, Science and digital Society has begun a round of contacts with the rectors of the Valencian universities at the Universitat de València.

The necessary funding model for the Valencian public university system, the urgent signing of the Valencian public university staff agreement, the modification of Decree 174/2002 which regulates the responsibilities of the teaching staff, as well as the new model of university regulation derived from the LOSU, were the main topics discussed in this first meeting that took place at the historical building of the Universitat de València, La Nau.

The new Regional Minister for Innovation, Universities and Digital Society, Josefina Bueno, chose the largest and oldest of the Valencian public universities, the Universitat de València, to begin a series of meetings with the rectors of the universities in our territory.

The Universitat de València, founded in 1499, is the oldest of the Valencian universities and is considered the matrix of the current public university system. The Universitat continues to be a benchmark both in terms of the volume of studies it offers (both undergraduate and master’s and doctoral degrees) and the demand of studies by students. It is also a model due to the research volume and the impact of the research carried out at the UV.

As part of the conversation with the new Regional Minister, the rector M. Vicenta Mestre, pointed out the need of approval of a long-term fund model that gathers the general conditions of the universities, both in terms of the volume of people and built surface area as well as the singularities such as the levels of obsolescence of the facilities, the updating of the spaces to face the climate emergency and the conservation of the historical and cultural heritage.

This model must be agreed by consensus and developed with the participation of the universities to guarantee the success of the agreement, which requires the contribution of more economic resources to the university public system, especially in the framework of the new draft of the Ley Orgánica del Sistema Universitario (APLOSU), which was discussed during this meeting.

In addition to the funding model, the rector of the Universitat de València has demanded the signing of the collective labour agreement for the staff of Valencian public universities. The rector of the UV has expressed the need of this agreement repeatedly in various public events and meetings with the Generalitat.

In addition to signing this agreement, already agreed between the universities, the Generalitat and trade union organizations, the development of substitute lecturers is a pending issue in the recently constituted in the Mesa de la Universidad (University Round Table), which requires rapid articulation. In this meeting they also discussed the modification of Decree 174/2002 that regulates the responsibilities of the teaching staff.