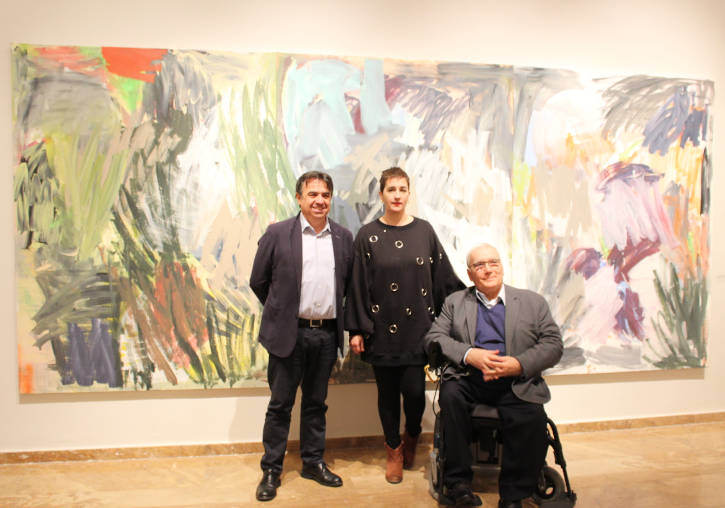 The highly abstract of the Valencian artist Rebeca Plana has started at Martínez Guerricabeitia Exhibition Room at Centre Cultural La Nau, where it is completed with the exhibition ‘Riu. Rebeca Plana’ to the next 23 February. In the exhibition, with exclusive work for this space and huge formats, the artist claims the Xúquer river with a particular point of view of her stay in La Ribera.

The exhibition, organised by Martínez Guerricabeitia’s Collection of General Foundation of Universitat de València in the series ‘Trobades’ with the collaboration of Banco Santander and Heineken España S.A., has been presented in a press conference on Monday at La Nau with the presence of the activities’ director of the collection, José Pedro Martínez; the exhibition’s commissioner, Martí Domínguez; and the artist, Rebeca Plana.

“In this exhibition Rebeca Plana claims the Xúquer river of La Ribera district, which goes few metres from her studio and the artist walks around, to breather and recover from the confinement”, points out Martí Domínguez, for who the writer “is another spirit of this stretch of river”. So that, she has grown beside the river and she gets to know it very well. “The destructive river, the devastating river”, points out the artist.

“‘Riu. Rebeca Plana’ is the rebellion and the claim of the paint for the paint because art doesn’t need to be explain, but has to be touched, seen, smelled..., it must be perceived through the senses”. In this way defines the painter the exhibition, who considers also the exhibition as a “fight” between the canvas and herself, becoming a huge personal work where reflects her emotions, the light and the dark, “like rivers, like nature”, she adds.

In fact, as Cézanne painted the Saint-Victoire mountain from Ais or as Michavila the glare, Rebeca Plana “paints her Xúquer river, with brutal strokes, contained force and an strong gesture, her pictorial mark, and this is what I admire the most”, recognizes the commissioner of the exhibition, who presents a collection with more than 40 works from different sizes, some of them are huge like ‘La força de la natura’, “a 4,5 metres canvas that condenses all Rebeca’s work and her artistic gesture, a work expressly painted for Martínez Guerricabeitia Exhibition Room and it is the central axis of the exhibition”, explains.

‘La força de la natura’, the main painting, show us the world of the rainforest, clearings and embroiled vegetation: “a metaphor of the artist’s life itself”, claims Domínguez. Rebeca Plana has painted for ‘Riu’ an amount of 43 paintings, from which 11 presents a huge format and two of them are tondos, the other 32 are paper works.

Another creations that stands out are the diptych ‘Elogi del Xúquer’, “Jam-full of light and colour”, or ‘Tempesta’, “painted during the cold drop that struck our territory”. It is about the pictorial result of artist’s sensations, joyful moments and dark instants. Martí Domínguez points out another canvas that talks about the artist’s mood: ‘Camí del riu’ or ‘Riu endins’ show the retreat moments; her tondos are also instants of her walkings strolls on the river, as ‘Riu-rau’ or ‘Lluent’, this last one are the reflections of water, “chromatic vibrations”.

To sum up, concludes Martí Domínguez, what show us Rebeca Plana is “a own world, with an absolutely personal and non-transferable gesture”.

For his part, José Pedro Martínez referred to the new commitment of the Martínez Guerricabeitia’s Collection to the abstraction and geometric art which, through Yturralde o Michavila, for example, “have left a profound mark on the Valencian art scene”. So, Rebeca Plana’s proposal is in line with a philosophy of welcoming “first class artistic manifestations”. He also announced: the Martínez Guerricabeitia’s Collection has a clear desire to support young art through the Bienal, which this year reaches its 14th edition, and this new line of sponsorship, which we have already seen with Mery Sales, now with Rebeca Plana and, at the end of 2020, with Nico Munuera".

In ‘Riu. Rebeca Plana’ we can see the highly abstract, sometimes calligraphic, character of her work. Rebeca Plana, appart from playing with the meaning of words -”riu, Rebeca”, she says-, combines elements of structured composition with a wild environment and improvisation; and, she uses everyday elements in the form of canvases and objects and takes them towards abstract expressionism, like a mattress or a fridge door, for example.

In opinion of Martí Domínguez, the Rebeca Plana’s work “poses a world of gross, modern, humanistic, handmade by purpose, of an ephemeral, dangerous and nevertheless well-designed, in the end, unexpected”.

And, as Rebeca says, “as long as there are brushes, there will be painting; as long as there is water and red stone like we can found next to the river, we could do painting”.

With ‘Riu’, Rebeca Plana closes a door to open another - the pure abstraction’s door -, so she works now in another project that will drive her work abroad and where she keeps the abstraction but with the figurative elements’ incorporation, a technique that she presents discreetly at La Nau.

Rebeca Plana's work has also been shown in individual exhibitions in museums and galleries such as the Sala Gallera (Valencia), the Galería Fernando Latorre (Madrid) or the Galería Punto (Valencia), and the Colegio de España in Paris. She has participated in various collective exhibitions in spaces such as the IberCaja in Zaragoza, Casa de Vacas in Madrid or the Antonio Pérez de Cuenca Foundation. She also participates actively in fairs with the galleries that represent her in contemporary art fairs such as JustMad (Madrid), ARCO (Madrid), Gent Art Fair (Belgium).

Guided tours
On the other hand and with aim of approaching contemporary art to society, the Martínez Guerricabeitia’s Collection, and the Office of the Vice-Principal for Culture and Sports organise free guided tours. You must book your visit by e-mail: visites.guiades@uv.es) or by phone number (963,864,922). 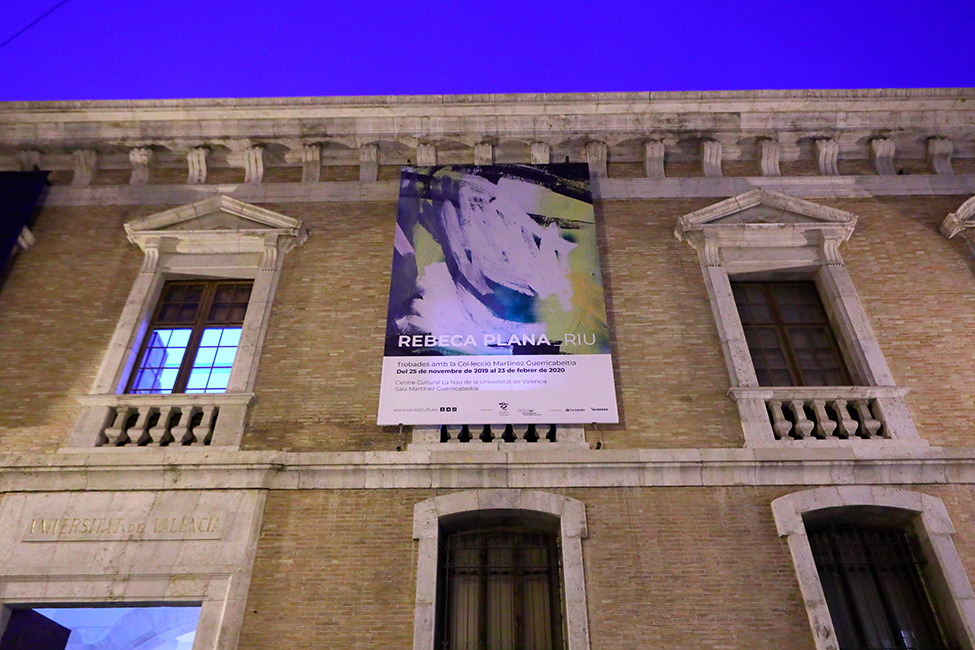 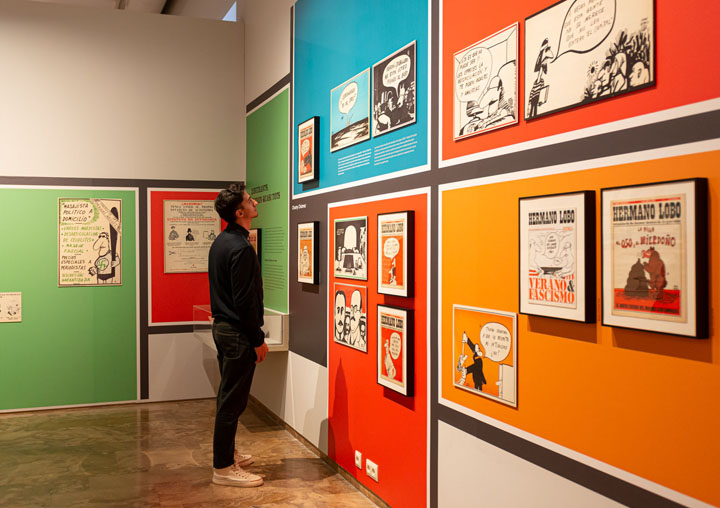 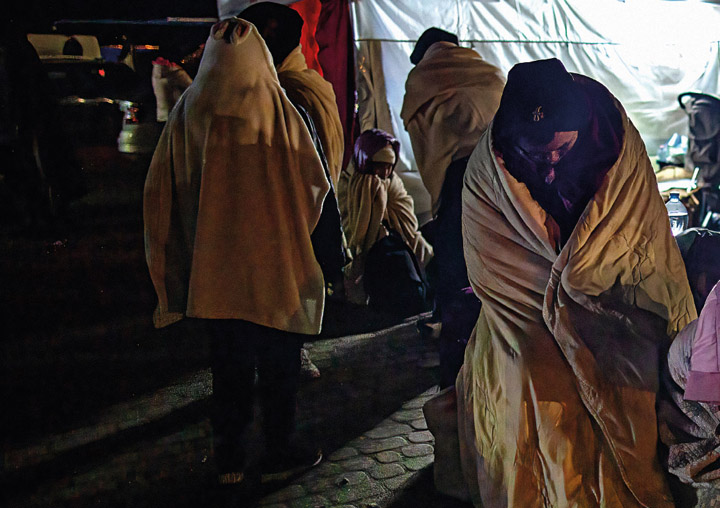 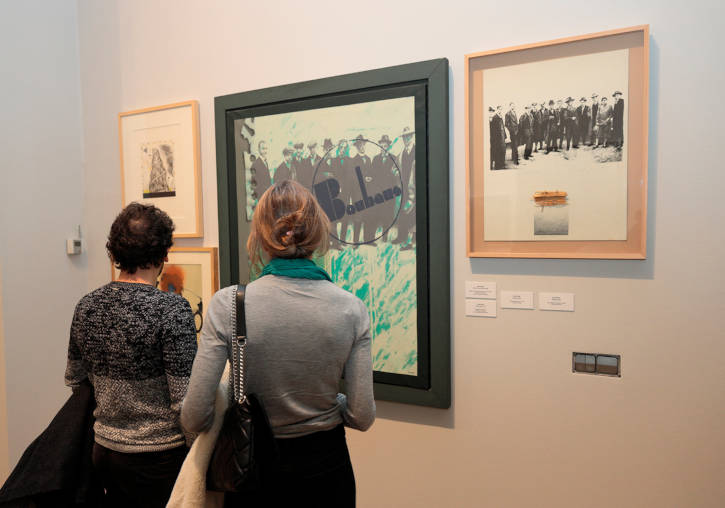