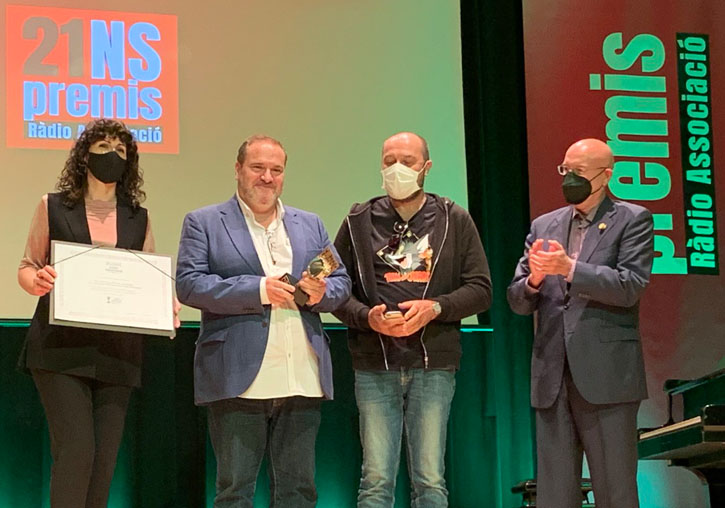 Carlos López Olano, second one on the left, with the award. Photo source: Ràdio Associació.

The documentary series El Mur: Els llocs de la memòria, a transmedia production of 13 podcast chapters that recovers the memory of the Civil War in Valencian lands and produced by the University of Valencia, À Punt Media and Plaza Radio, received this Thursday the Innovation Award from the 21 Premis Ràdio Associació de Catalunya, the entity that co-manages the Catalan RAC stations. The award was presented in the ONCE Auditorium in Barcelona and was collected by the professor from the Faculty of Philology, Translation and Communication Carlos López Olano, director of the project.

El Mur: Els llocs de la memòria is a podcast of 13 chapters, each lasting 25 minutes, that recovers the memory of the Civil War with the testimonies of the survivors, heroes and also victims. The name of the project refers to the Wall of Paterna, a space where the Franco regime shot more than 2,200 people.

Among others, the chapters deal with prisons (the women’s prisons on Passeig de la Petxina or Sant Miquel dels Reis, both in Valencia), the bombings (such as the Alicante Market in May 1938 where more than 300 people died, or that of Castellón in 1937); concentration camps (for example, Albatera); the aerodromes (those of Fontanars dels Alforins or La Pobla del Duc) or the XYZ line, built in the south of the province of Castellón and which reached Teruel as the last bastion before the advance of Franco’s troops towards Valencia.

“For the narration of these memory stories all kinds of audiovisual tools are used. Each chapter consists of a radio podcast, broadcast by waves, web and networks, and an extension for the web, which offers photographs, videos, documents, illustrations, images recorded with drone or 360° cameras, which it allows a diversity of narrative approaches that open up new ways of having an eye always on innovation, and this is precisely what we have been rewarded with”, explains López Olano.

The documentary series, in which the professor of Journalism at the University of Valencia Lola Bañón also collaborates, has the objective that new generations know the testimony of the protagonists of the War and Repression, imprisoned, shot or appointed after the trials very summary, and those who experienced the bombings, attacks, or any type of discrimination. Also the spaces where the events took place and which currently form a huge cultural heritage.

The documentary team is completed by Eduard Torres in writing, network management and illustrations; Sergio Formoso in image, visual and web design; Miguel Coll in editing, sound production and locution; and Ofèlia Sanmartín in correction of the Valencian. Currently, a third season of the series is being prepared that will be based on the names of memory.

117 nominations for the awards

In this 21st edition, 117 nominations have been submitted for the distinctions that reward the best professionals and radio programs in the Catalan linguistic field. The jury of the awards is chaired by Carles Solà, and formatted by Joan Manuel Tresserras, Imma Tubella, Assumpció Maresma and Jordi Margarit.

Hashtag for the awards: #PremisRadioAssociacio2021

- Carlos López Olano, in an interview at the Swedish-Norwegian Hospital in Alcoy.

The BioRoboost Project, coordinated by the University of Valencia, presents its White Paper on standards in Synthetic Biology