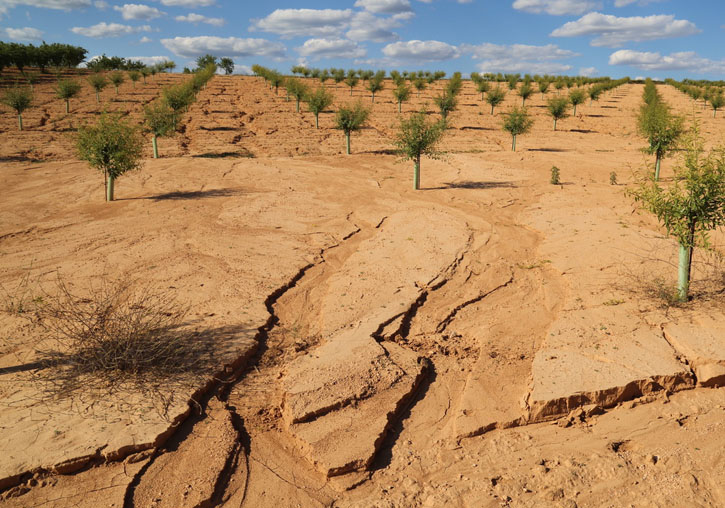 Crop fields in the mediterranean area with soil suffering from erosion.

The University of Valencia (UV) participates in a European project Horizon 2020 PRIMA REACT4MED, which with 11 partners from nine European countries aims to restore Mediterranean agricultural ecosystems and prevent soil degradation and desertification, two of the greatest risks to conservation of the ecosystems and livelihoods of the Mediterranean communities. Artemi Cerdá, professor of Physical Geography at UV and an erosion expert, leads the Spanish part of the project, with a proposal in Valencian territory, in the Cànyoles river basin.

Each year, the Mediterranean area loses about 0.5 tons of fertile soil per hectare due to soil erosion, almost double the European average. The area’s water resources are under constant pressure due to intense weather events and anthropogenic causes such as climate change, urbanisation, population growth and overexploitation of resources, which put pressure on the soil towards degradation and desertification.

To address these risks, the project “Inclusive Outscaling of Agro-ecosystem Restoration Actions of the Mediterranean”, whose initial meeting took place on the island of Crete recently and which will last until 2025, provides deeper scientific knowledge so that the people in charge can propose effective measures for sustainable land and water management. The proposal led by Artemi Cerdà is a cover of green manure and pruning remains in the Cànyoles river basin that will be treated as an alternative to erosion in the environment of the main river of La Costera region.

REACT4MED aims at the social and economic development of the Mediterranean, especially of the most vulnerable social groups, which will have to be part of the actions. Among these, the reforestation of marginal lands can be carried out, covered to prevent erosion, soil moisture conservation actions, differentiated cultivation systems, integrated or biological management of soil fertility, the use of water resources. alternatives and smart farming practices, among others. The countries participating in REACT4MED are Spain, Greece, Italy, Germany, Cyprus, Israel, Morocco, Turkey and Egypt.