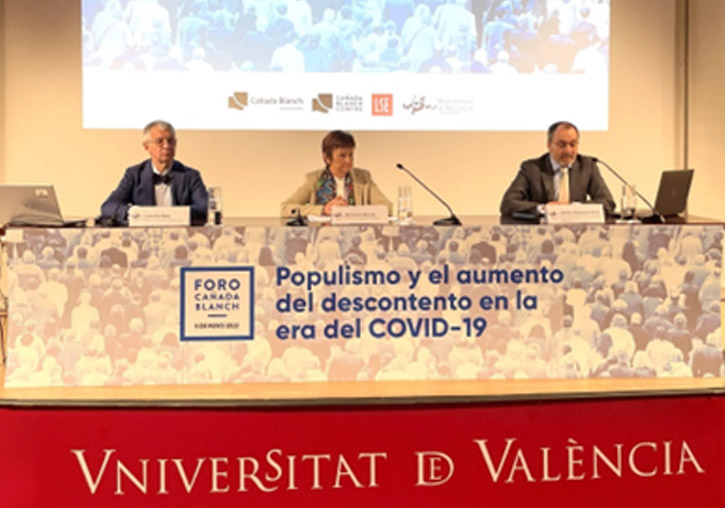 Thanks to the strategic alliance between the Cañada Blanch Foundation and the London School of Economics (LSE), European experts at the forefront of social science research met on 5 May at La Nau. The Cañada Blanch Forum 2022 addressed the citizen discontent and its relation with the growth of the anti-establishment vote in the post-COVID time.

On Thursday 5 of May the Aula Magna of the La Nau Culural Centre of the Universitat de València hosted the Cañada Blanch Forum 2022, focussed on “Populism and the rise of the discontent in the COVID-19 era”.

This encounter opened the discussion about the rise of populisms in the European Union, the votes in favour of the Brexit, and the election of Donald Trump as President of the United States. Furthermore, there was time to reflect on how the global pandemic of the COVID-19 may affect the rise of anti-establishment attitudes and parties. To the meeting went entrepreneurs, researchers and other representatives of the civil society who were interested in this issue of global importance that is subject of intense discussions.

The forum started at 09:30 with the presence of Mª Vicenta Mestre, rector of the Universitat de València and supporter of the Cañada Blanch Foundation; Juan Viña Ribes, president of the foundation; and Andrés Rodríguez-Pose, full professor of Economic Geography at LSE, director of the Cañada Blanch Centre and Princesa de Asturias professor at LSE.

After the inauguration act, the professor Andrés took the floor to talk about the factors behind the growth of populism in the developed world. This was followed by three presentations by a line-up of European experts in different areas of knowledge such as the political scientist Jonathan Hopkin (London School of Economics), economist Özge Öner (Cambridge University) and the innovation specialist and regional scientist Rune Dahl Fitjar (Stavanger University).

After the presentations the researchers were the protagonist of a round table discussion entitled “Populism: Brexit, Trump, and the crisis of the system in times of COVID-19” in which the public also participated and discussed with the speakers.Finally, at 2 p.m. the event was brought to a close.

One again this year, this socio-economic forum organised by the Cañada Blanch Foundation with the London School of Economics (LSE) and the Universitat de València brings together the advances of renowned professionals of the social science research. The close ties that the Foundation maintains with the LSE are materialised in this meeting as a bridge with a direct connection to knowledge, which allows anyone interested to learn about the work of great experts in order to understand current social and economic trends and behaviours.