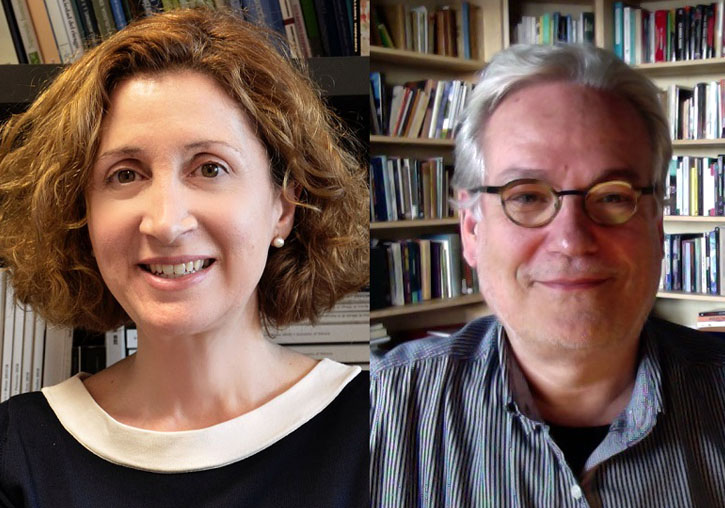 Juli Peretó, Professor of Biochemistry and Molecular Biology at the University of Valencia and coordinator of the book Iluminando la evolución humana. Ciento cincuenta años después de Darwin (‘Illuminating human evolution. One hundred and fifty years after Darwin’) and Carolina Moreno, director of the «Sin Fronteras» collection and professor of Journalism at the University of Valencia speak about this book.

Peretó: “In Darwin’s work, the image came to occupy an important place and he was one of the first to use photography with a scientific purpose”

1. What inspired you to research and disseminate human evolution one hundred and fifty years after Darwin?

2. What is the purpose of this collection of texts in your book Iluminando la evolución humana?

To review Darwin’s ideas about human evolution and provide an overview of what we know today. The book contains texts from a variety of specialists in Darwin’s work and the different evolutionary approaches, for example, palaeontology, rock art, psychology, genomics, linguistics, as well as an important aspect of Darwin’s work: sexual selection.

3. During the process of writing the book, did you discover any kind of information unknown to you that would make you rethink the approach you wanted to take?

You always find new aspects when you study a work as rich and diverse as Darwin’s. One question that particularly interested me was why he drew some hypotheses about phylogenetic relationships in primates, but never published them. In Darwin’s work, the image came to occupy an important place and was one of the first to use photography for scientific use, in his botanical work and in his research on the expression of emotions.

4. How do you rate your experience as the author of this book?

It has been a worthwhile adventure: the work was conceived as a collection of articles for the journal Treballs de la Societat Catalana de Biologia (which has appeared as volume 72), then Carolina Moreno, the director of the collection «Sin Fronteras», considered it appropriate to publish the Spanish version of all the texts. The first scoop I can give is that the English translation of the entire work will be published in a few months by Springer Publishing, within its collection of evolutionary biology.

5. A part of his work is dedicated to natural selection today, can we detect its effects in recent times?

Especially in the chapter written by Francesc Calafell and David Comas, and in that of Elena Bosch, they have explained very well how the effect of natural selection on genes and genomes can be read. This allows us to conduct studies on the functions that have been relevant in the evolutionary process.

6. In the final part of the book, the question of what humans will look like in the future is posed, what can you tell us about the genetic and evolutionary future of mankind?

Evolution cannot be predicted. We can reconstruct the past and do it better and better by reading genomes, but the future is unknown. We have a remarkable ability to modify the environmental factors that act on us, but our capacity for genetic intervention is, at best, at the individual level and not at the population level, so it can be said that we have no control over the genetic future of the species.

7. Looking to the future, how do you see the situation in relation to artificial intelligence and its limits?

Undoubtedly, computer technologies have and will have a great impact on us. For now, I see that artificial intelligence can achieve some increased capabilities compared to ours, such as computing power or memory. I am more sceptical about its scope in more complex areas such as artistic creativity.

8. Do you think that the changes that humanity will experience will be reflected in its genome?

Genomes fix those changes that pass the filter of natural selection in addition to many changes that are randomly fixed. There is no direct relationship between what we do and what is fixed in the genome. There is a lot of talk today about epigenetic inheritance and the return of a Lamarckian evolution, but I think there are more cases of abuses of terms and concepts than of a reality.

Moreno: “It is a pride to direct two dissemination collections and I feel a great vocation for the public service that is provided to society”

1. How did you manage to become the director of an entire scientific dissemination collection?

After many years of work in a field such as research in scientific communication, finally the option arose to be able to contribute and collaborate with the people with whom I had worked for many years at the University of Valencia, through projects, collaborations, and activities, such as the team that forms the UCC + i, and especially with Soledat Rubio, its director. A dear colleague had died, Fernando Sapiña, who was the previous director of both collections, with whom I used to collaborate and share approaches on dissemination, when I was offered to direct both collections.

2. How do you feel after this?

It is a pride to direct two dissemination collections and I feel a great vocation for the public service provided to society. I think the books we publish are works of excellent quality. The contents are excellent and all the books that are published are subjected to external evaluations by prestigious experts. Also, from an editorial point of view, they are impeccable. On the other hand, I am very aware of the great work done by the two previous directors (Juli Peretó and Fernando Sapiña), as well as by the editorial coordinator, Soledat Rubio. The previous work is an incentive for me to continue with the publication of books that leave a mark on society and that can be of great value to people pursuing high school, baccaklaureate and college studies. For all this, I am grateful to the University of Valencia for being at the forefront of the collections, which have also received several publishing awards.

3. What advice would you give to a person who wants to follow in your footsteps?

To those who want to be in charge of a science dissemination collection, I would say that for the collection to be successful, they must have a strong commitment to science dissemination. In the same way that academics spend a lot of time researching and teaching, dissemination is no longer an entertainment or pastime for researchers, but a further commitment for them. The transfer of knowledge through works of scientific dissemination is a further step in research and, therefore, being in charge of a dissemination collection involves making decisions, advising authors, assessing issues, collaborating with the editing process, and to be part of a huge and important work team for the book to finally be published and also to make a place in a world where there are very good disseminators, but which fails to increase the number of readers. Another tip would be to take on challenges, such as making the titles in the collection a reference for certain audiences.

The professor of Parasitology Santiago Mas-Coma, new member of the Royal National Academy of Pharmacy