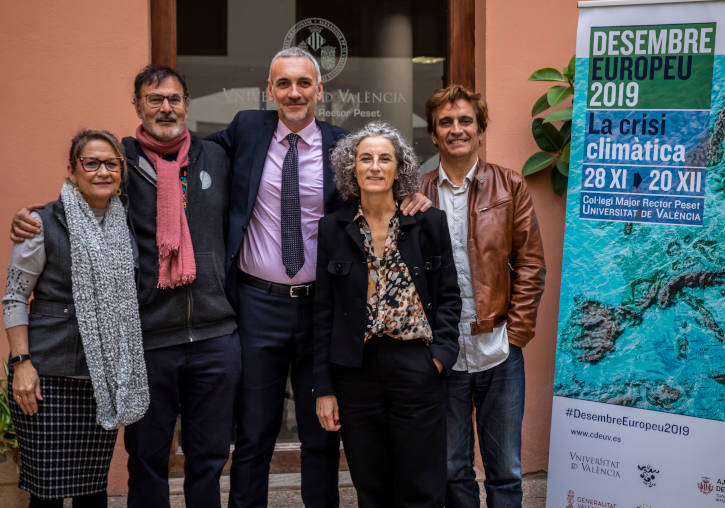 “Europe’s objective is a change of attitude in industry and also in citizens to achieve lower CO2 emissions, and thus gain ground to the climate crisis”. This is how the PSE Inmaculada Rodríguez-Piñero MEP expressed herself during her speech at the debate table organised on 13th December by the Centre de Documentació Europea de la Universitat de València as part of the 'Desembre Europeu' cycle.

Rodríguez-Piñero opened the day which, under the title “Els Estats Generals d’Europa” (The General States of Europe), was held in the Muralla Room of the Principal Peset Hall of Residence, followed by university students who took part in the debate, showing their concern for what the European institutions have already described as a "climate emergency".

The Socialist MEP explained the means that the EU is using to fight the climate crisis. However, she recalled that this is a global emergency that does not depend solely on Europe and that major powers, such as the United States or China, are equally responsible.

“From Europe we can exercise political and institutional leadership that sets guidelines, but citizen behaviour is also important and, of course, we cannot end this crisis solely from the EU”, said Rodríguez-Piñero, who pointed out two keys for achieving the main objective, “change of attitude”: “The first is to prevent European industry from relocating in order to not to comply with environmental regulations. The second is to guarantee that the country that imports into Europe does so in accordance with current precepts, because Europe is a strategic market and it is necessary to regulate the tax, especially on imports from China”. In this country, the production of goods and services is cheaper because the manufacturers do not care about the cost of reducing the environmental impact.

Therefore, she also acknowledged that “the World Trade Organisation must be more demanding and should introduce further regulation of commercialisation”. She also stressed: “It is not about what is being marketed or not.  The key is: under what conditions goods and services are marketed?”. 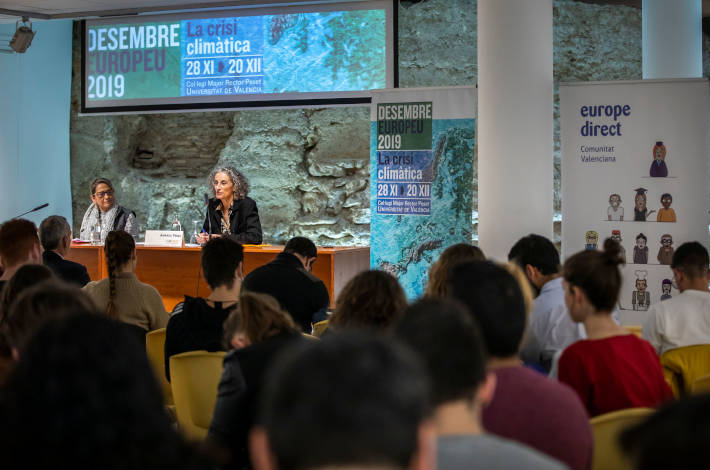 In the colloquium, other significant issues were addressed, such as the philosophy of "Zero Waste”. According to Inmaculada Rodríguez-Piñero, “Europe is still far away”, but “for the first time has set itself an objective in the waste field”. Other political goals that have been discussed are responsible consumption, modal transport and the regulation of conflict minerals through improved regulations and a consumption guarantee through product traceability.

Los Verdes: a critical approach
The second part of the day was developed by David Hammerstein, Los Verdes MEP between 2004 and 2008, who offered a critical view by stressing "great myths of the fight against climate change", such as, in the case of València, for example, "avoid the climate and ecological crisis, and at the same time expand highways, asphalt their natural landscapes, let the Albufera die, expand the port to double the number of cruises, ships and trucks or build new developments for a population that does not exist".

In this sense, Hammerstein criticised “the techno-optimism or the illusion of believing that industrial and commercial growth is compatible with the fight against the climate crisis”. He also denounced the lack of real CO2 record keeping: “The CO2 record keeping used by the EU is fake because it does not take into account 20 or 30% of European emissions, such as the consumption of mobile phones, for example. This percentage of pollution is currently invisible”.

On the other hand, he has stated, “being sustainable is not just recycling because we cannot recycle even 10% of what we consume. Moreover, we keep ignoring the total amount of consumption; therefore, as long as we continue to prioritize growth we will not be able to exert a real fight against the climate crisis”. 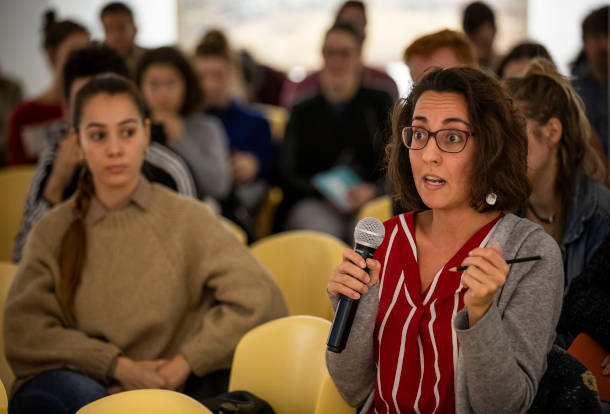 In Hammerstein's opinion, the climate emergency occurs because there is “a problem of scale: the total amount of human activities exceed the limits of the planet and continuous growth causes efficiency to fail. We increasingly need to spend more energy to extract the same amount of minerals or fuels of poorer quality and, in short, we consume more and more” with the consequent increase in emissions.

In this sense, he has presented some proposals for green policies for the EU, such as the paralysis of subsidies "to climate collapse" with aid and/or financing for “fossil fuels, new roads, ports, airports, and intensive agriculture and livestock farming”. According to Rodríguez-Piñero, the tax regulation on "imported emissions" and helping the poorest countries to make the "ecological leap" by favouring sustainable production; increasing taxation on the most polluting sectors; creating a "Zero Emissions area" in the EU; or promoting a "decentralised EU renewable energy revolution so that citizens can produce, store and share energy".

‘Els Estats Generals d’Europa” is an activity promoted by the Centre de Documentació Europea of the UV, registered in the General Foundation of the Universitat de València, which this year has celebrated its second edition within the programme of the cultural and academic cycle 'Desembre Europeu', dedicated to the climate crisis.