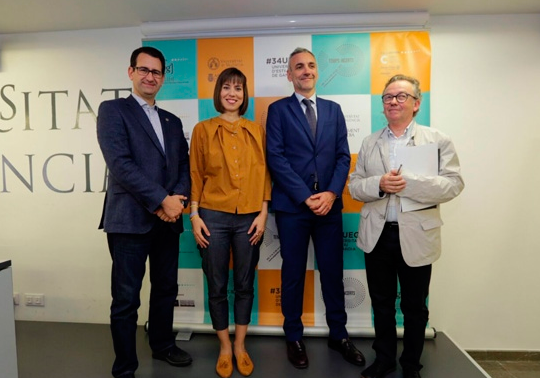 The supply of the UEG of this year, which has already open for enrolment, consists of 15 courses and 8 workshops. ‘Temps incerts’ is the motto of the 34th Universitat d’Estiu de Gandia which will take place between the 17 and the 21 July in the capital of La Safor. The enrolment should be made through the webpage www.uegandia.es. The Universitat d’Estiu de Gandia of the Universitat de València also proposes open activities that prolong the debates until nights every edition.

Jorge Hermosilla, Vice-Principal for Projection and Participation, justifies the motto due to the ‘uncertain times that we live in. These times deserve a calm observation, with the necessary distance to analyse the economic and social impacts of the climate change, the globalisation or the effects of the return of the protectionism and of the simplified ideologies under the name of populisms. It is time for rethinking the distribution of the work due to the unbearable and increasing inequality that is at the origin of the population displacements which open the news. It is also time for the memory, which is necessary to educate in diversity in order to manage the disparities of our societies’.

There are some courses among the 15 scheduled, lasting 10 to 12 hours that stand out. Some of them are ‘Miradas sobre el populismo’ coordinated by the professor of the UV Roberto Viciano and in with the member of the Parliament Iñigo Errejón will participate, ‘Periodismo y democracia’ in which the journalists Amàlia Garrigós and Lola Bañón stands out and ‘Cómo planificar la conservación de la Naturaleza al S.XXI’ which will count on with prestigious experts as Ignacio Jiménez. He is the director of conservation of The Conservation Land Trust (Argentina) or Miguel Herrero of the Doñana Biological Station. Other courses will be about the economic crisis and its impact on history, the importance of the diet, the threat of the climate change or the representation of the great traumas of the S. XX.

When it comes to the workshops, in this edition of the UEG the number of them have increased. The workshop, which will last from 4 to 8 hours, will deal with so diverse topics such as the film critic, the prevention in paediatrics, the homophobia, the recreational science, the mindfulness or the power architecture.

The decrease in prices which was established in previous editions is maintained in this one. The courses cost €20 and the workshops cost €10. Moreover, the assistance will be recognised with free-choice credits. The enrolment should be made through the webpage www.uegandia.es.

The UEG also proposes open activities that prolong until the night the debates about the topics every edition. They are collective spaces which are open to citizens. It is a cultural event which deals with the memory and with the future of our reality. The UEG is organised jointly by the Gandia Centre of the UV and the Town Hall of the city. This Edition, the 34th, happens at the same time that the declaration of Gandia as the Valencian Cultural Capital by the Valencian Government.