Cristina Almeida gives a conference in Gandia on feminism 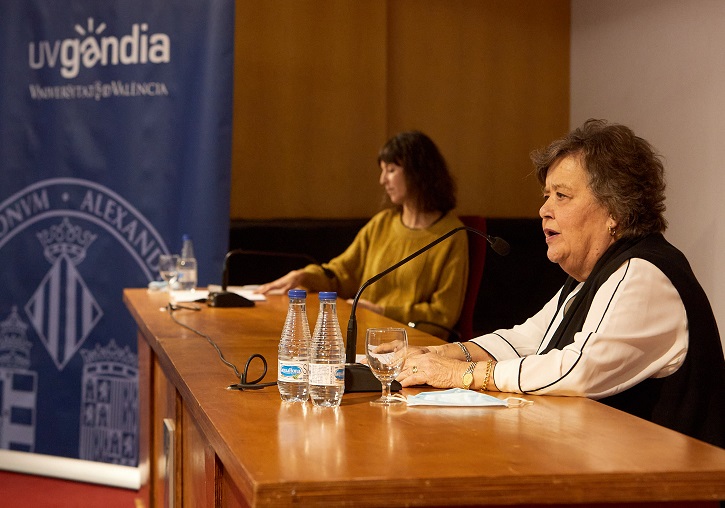 The politician visited Gandia last Friday where she closed this year's edition of the Universitat d’Hivern. Almeida filled the Casa de la Marquesa in a speech where she made a plea for feminism and the necessary fight against gender violence.

The Casa de la Marquesa assembly hall in Gandia was too small to listen to Cristina Almeida. The politician and feminist came to Gandia on Friday 18th February to give the conference “La violencia de género, una lucha incansable”. The conference was attended by the vice-principal of Culture and Sport, Ester Alba; the manager of the General Foundation of the UV, Cristóbal Suria; as well as the mayor of the city, José Manuel Prieto, who was accompanied by almost the entire municipal government. The conference was presented by the director of the International Centre of Gandia, Carme Melo.

During her speech, Almeida referred to the changes that have taken place regarding women since the last years of the dictatorship until the present day, explaining the advances made by feminism. She also emphasised the necessary fight against gender violence and the turning point represented by the approval of the Law against gender violence passed in 2004. Cristina Almeida took advantage of her intervention to warn of the setbacks that have occurred in recent years in the field of feminism and the need to make education the necessary tool to fight against sexism.

Almeida thus concluded a new edition of the Universitat d'Hivern, which this year has been dedicated to women's health, focusing on both the physical and mental aspects.

This conference had the collaboration of the Equality Union of the Universitat de València.