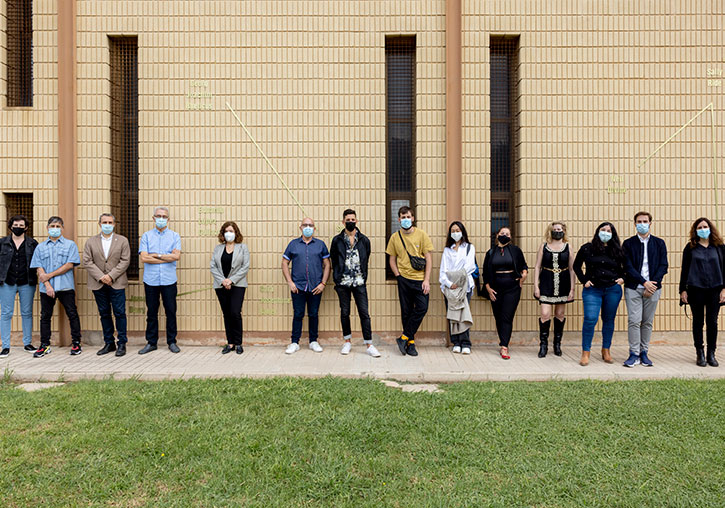 The XXIV Mostra art públic / universitat pública has been inaugurated at the Burjassot Campus of the Universitat de València, where it can be visited from 4 October to 2 November. In addition, the Mostra will also be activated in the Blasco Ibáñez Campus this year, from 22 October to 22 November. Organised by the Universitat de València via the Information and Promotion Service, the Mostra hosts eleven works of ephemeral nature from Rossi Aguilar and Andrea Siervo, Joaquín Artime, Pablo Bellot, Azahara Cerezo, Anaïs Florin, Miquel García, Sara Gurrea, Laura José, Sergio Luna, Suri Kim and Ángel Arias (SUMOK), and Pep Sales Gabarda.

The Mostra art públic / universitat pública has been inaugurated this Monday, 4 October, at the Burjassot Campus in a ceremony where the vice-principal for Cultura i Esport of the Universitat de València, Ester Alba; the vice-principal for Ocupació i Programes Formatius, Adela Valero; the Delegate for Students, Manuel González; the organiser of the exhibition, Alba Braza; members of the deanship, and teaching and campus staff have attended. After the inaugural speeches, the artists conducted a guided visit through the works exhibited in this university space dedicated to teaching and research.

The Mostra is convened by the Office of the Vice-Principal for Occupation and Training Programmes, promoted by the Delegate for Students and organised by the SeDi Information and Promotion Service, with the collaboration of the Office of the Vice-Principal for Culture and Sport, as well as the campus services and staff. It connects the university community with its environment by the selection of works of art, specifically planned for these spaces, making them trigger other multidisciplinary knowledge.

This edition, apart from being located at the Burjassot Campus, will be held in the Blasco Ibáñez Campus from 22 October. This means an increase in works and spaces that, according Alba Braza, organiser of the Mostra, “it doesn't add, it multiplies” and it will make possible that works from different campuses “also talk with each other and start a dialogue”. The number of projects has also been increased to eleven. These works deal with topics such as environmental sustainability, historical memory, sexual diversity and new masculinites, new social communication models, archaeology of new technologies, and influence of computer algorithms in the current world.

According to the vice-principal for Cultura i Esport of the Universitat de València, Ester Alba, one of the values of the Mostra art públic is that it is an initiative which “asks itself what art can provide to contemporary problems” and that, with its mediation role, it contributes to “the vocation of the Universitat de València towards comprehensive and critical training”. In this sense, Alba has mentioned the activity Sabers tentaculars which brings art closer to university students, within the framework of the Mostra. On the other hand, the Delegate for Students, Manuel González, has thanked for “having kept students in mind”, for “having pointed out the value of what young people can provide” and for “having let art pervade university campuses”.

Besides having interacted with the university environment, the artists have carried out their works with the collaboration of staff from different departments of the Universitat de València, with whom they have exchanged knowledge and experiences. These collaborations are “gifts”, Braza has claimed, and “they make real the dialogue between disciplines”. For instance, María Roncero, professor of the Department of Psychological Personality, Evaluation and Treatment of the Universitat de València, has collaborated with Laura José in her work La culpable. Los comentarios de cada día; Suri Kim and Ángel Arias have worked with Clara Gómez Clari and Rafa Muñoz Espí, from the Department of Physical Chemistry, in their work For Eternity; Pep Sales Gabarda has counted on the collaboration of the Libraries and Documentation Service, and of Juan Antonio Rodríguez del Pino, professor of the Department of Sociology and Social Anthropology, in Masculinidades disidentes. Una alternativa frente a la violència de género; Sara Gurrea has been supported by Isabel Cordero Carrión, professor of the Departament of Mathematics, and Gloria Herrero Gascón, student of the Mathematics degree, in her El teléfono roto; Miquel García has cooperated with Vicent Gabarda Cebellán, associate of the Departament of Modern and Contemporary History, and the Plataforma de asociaciones y familiares víctimas del franquismo de las fosas comunes de Paterna (a movement for the mass graves victims during Franco regime), in Exhumación 1; and for Redes fantasma, Andrea Siervo and Rossi Aguilar have worked together with Núria Martí, member of CALAGUA-UV, a research group in Environmental Technologies.

A catalogue including photos of the works and artists' reflections will be published in connection with the Mostra.

The jury that selected the projects was made up of Mijo Miquel, professor of Fine Arts in the Universitat Politècnica de València; Jodie Di Napoli, mediator and exhibitions coordinator; Alba Braza, organiser of the Mostra art públic / universitat pública, and Ester Alba, vice-principal for Cultura i Esport of the Universitat de València.

Sabers tentaculars: a cross-curricular dialogue between students of the Universitat

For the second time, and after the stop caused by Covid-19, the Mostra art públic / universitat pública is supplemented by a mediation activity targeted towards university students which has been titled Sabers tentaculars. In this parallel initiative, tentacular groups of students of the Universitat de València from different degrees will be created. By means of the artistic works of the Mostra, teamwork and meetings with artists, they will explore the cross-sectional relations between disciplines which are present in the current art, as well as the collaborative networks existing between the university community and the artistic and cultural world. Additionally, this training will help them connect and understand better the art installations and be able to transmit these experiences to other students.