An open-air Neanderthal habitat over 120,000 years old is discovered in Aspe 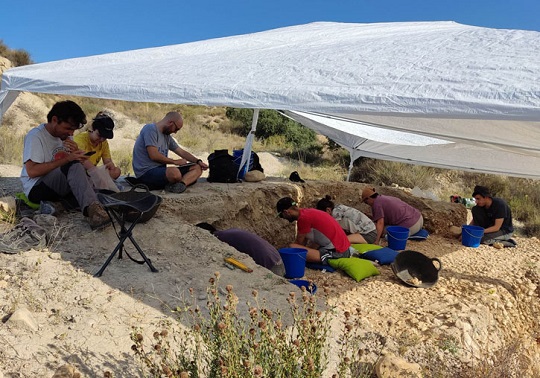 A research team from the Department of Prehistory, Archaeology and Ancient History of the University of Valencia (UV) led by Professor Aleix Eixea, in collaboration with the University of Alicante (UA), the Bizkaiko Arkeologi Museoa and the Institut des Sciences de l’Evolution of France have discovered and dated in Aspe (Alicante) an open-air Neanderthal habitat over 120,000 years old in the Natural Park of Los Aljezares.

Historically, the archaeological record of the European Palaeolithic and, specifically, of the Iberian Peninsula, comes from the information provided by sites located in caves. Most of the archaeological excavations in the last 150 years have been carried out in these types of sites, so there is very little information with which to explain what happened outside them both from the point of view of human behaviour and settlement patterns.

During the Middle Palaeolithic, the period in which Neanderthals lived, these populations also settled in open-air camps. This is the case of the Los Aljezares site which, according to UV professor Aleix Eixea “is one of the few examples of this type in the Iberian Peninsula and the only one in the Valencian area in which two archaeological levels have been documented in their original position, rich in lithic, faunal and archaeobotanical materials, and well dated in time”.

Eixea also points out that “the results obtained in this study show that this site served as a crossing point for the Neanderthal populations between the coast and the interior of the Iberian Peninsula within a wide territorial network that the different groups would use to stock up on biotic and abiotic resources, fundamentally for the configuration of their stone tools (scrapers, spear points, etc.) and the processing and consumption of the animals they hunted (deer and horses)”.

The geological study of the deposits in which the Los Aljezares site is located has made it possible to define a landscape and a climate very different from the current ones. This work, together with the dating of the site, has been carried out by the professor of the Department of Earth and Environmental Sciences of the UA Jaime Cuevas, who states that “the site can be framed during the last glacial maximum, a period with a slightly warmer and wetter climate than the current one, where the environment of the Vinalopó basin in this sector was characterised by flat areas with a system of lagoons instead of the complex network of ravines that we can observe today. This configuration could favour the use of Neanderthals in an accessible landscape, with stable water and nearby biotic resources”.

From the analysis of the marks of use left on these stone supports, it has also been possible to testify the use of tools made of wood, but which have not been preserved. Thus, this study highlights the importance of open-air sites during the Middle Palaeolithic and how they have gone unnoticed in research. In this sense, Los Aljezares provides relevant keys to better understand the ecology, adaptation, and dynamics of the lifestyles of the Neanderthals who inhabited the Iberian Peninsula.

In the coming months, with the help and collaboration of the Asociación Cinco Ojos. Observatorio de Patrimonio y el Ayuntamiento de Aspe (‘Heritage Observatory and the Aspe City Council’), the field work will be resumed with the aim of expanding the available information.

Eixea is joined as representatives of the UV in the studio by Miguel Ángel Bel, Ana Bonnet, Yolanda Carrión, Álvaro Martínez-Alfaro, Carmen M. Martínez-Varea and Raquel Pardo, researchers from the Department of Prehistory, Archaeology and Ancient History.

1. Jaime Cuevas-González (left) and Aleix Eixea (right) observing some of the archaeological remains that appeared in the 2021 campaign.