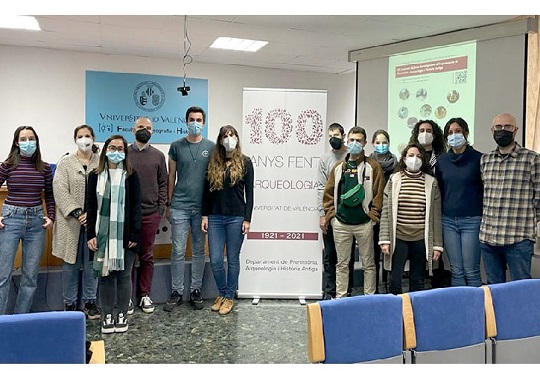 The University of Valencia (UV) has started its activities on Friday to mark the centenary of the Archaeology Laboratory, created to promote knowledge of Valencian sites in its first stage. The Young Researchers Seminar in which the activity being carried out by a group of doctoral students is shown, held today, or two exhibitions during 2022 and an archaeological photography contest are some of the activities planned on the occasion of the anniversary.

The Archaeology Laboratory of the University of Valencia began its activity on December 3, 1921 when the faculty of Arts unanimously approved the proposal presented by Professor Gonzalvo Paris, the institution’s first Archaeology Epigraphy and Numismatics professor. The action was intended to enhance the knowledge of the Valencian deposits, although since the middle of the twentieth century the laboratory staff has worked on an international scale.

“The centenary, with activities throughout the year, was born to transmit the knowledge of Valencian archaeology and the work of the research staff, not only through teaching but also through extracurricular activities such as excavations, conferences, exhibitions and conferences open doors”, declared Teresa Orozco, director of the Department of Prehistory, Archaeology and Ancient History.

Thus, today Friday, the III Seminar of Young Researchers has shown some of the work in progress of doctoral students of the UV developing their doctoral thesis in the Department, in a conference coordinated by Sonia Machause López and Aleix Eixea Vilanova. It is a conference dedicated to sharing and discussing the respective lines of work, trying to reinforce the transversality of their studies.

In addition, the prizes for the 100 anys fent arqueologia archaeological photography contest have already been settled. Rubén Caballero (jury prize) and Carlos Solaz (photograph with the most likes) who were presented with the ‘autumn survival kit’, a set of details with the logo of the Centennial of the Laboratory and a set of books.

Other activities planned within the framework of this commemoration, from February 3, 2022 to April 3, will be the exhibition Passat i present, 100 anys fent arqueologia a la Universitat de València in the Open Room of the La Nau Cultural Centre, an event organised by the department and the Vice President for Culture and Sports. Admission will be free and the opening hours are from Monday to Saturday from 10:00 a.m. to 2:00 p.m. and from 4:00 p.m. to 8:00 p.m. (Sundays and holidays only in the morning hours).

Also, on those dates will take place in the Sala Duc de Calabria of the La Nau Cultural Centre the exhibition ‘Dels cronistes al carboni 14: un viatge per l’Arqueologia valenciana a través dels llibres’ focused on publications and illustrations on Valencian archaeology from the sixteenth century until the 1960s, showing the evolution in the theoretical and methodological approaches of the discipline, as well as the changes in the excavation systems, and the greater professionalisation of this discipline.

“The fact that the Laboratory is turning 100 years is a source of pride for the members of the Department who, in some way, consider ourselves to be indebted to the teachers who have made it possible for us to be in this stage of celebration”, highlights Teresa Orozco. Currently, one of the various challenges is to achieve a greater effort to make the results of the different works reach society, in such a way that the investigations allow a better understanding of the past through the material remains that reach the present.