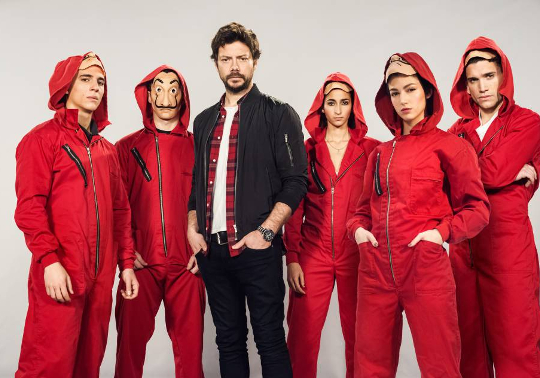 On 18th July, one day before its world premiere, the Centre Cultural La Nau of the Universitat de València hosted the preview of the first two episodes of the new season of ‘Money Heist’. This event is part of the ‘Nits de Cinema’ programme.

The screening of the first two episodes of the new season of ‘Money Heist’ will take place simultaneously in eleven Spanish cities. València is one of them and the space chosen exclusively has been the Centre Cultural La Nau of the Universitat de València.

‘Money Heist’ is a rare case of success: it went from free-to-air television to become, in Netflix's words, the most watched non-English-language series on this platform worldwide. Created by Álex Pina, its cast includes Úrsula Corberó, Álvaro Morte, Alba Flores and Miguel Herrán, among others.

Praised by the public and critics, last November it won an International Emmy in the category of Best Drama, in addition to being awarded Best Spanish Series and Special Audience Award at the Luchón International Festival (France), Best National Fiction and Best Director at the Vitoria Television Festival (FesTVal), Iris Award for Best Screenplay, Silver Stills as Best Spanish Series or award at the MiM Series Festival for Best Director.