‘La ciència a taula’, the publication of the magazine Mètode, wins the Joan Lluís Vives award for the Best Book on Natural and Applied Sciences 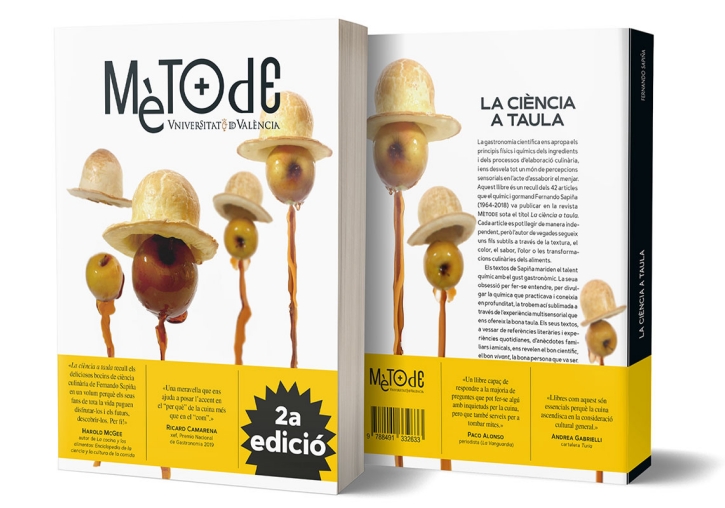 The second edition of the Joan Lluís Vives awards, organised by Xarxa Vives d’Universitats, has acknowledged ‘La ciència a taula’, the last volume of Monografies Mètode, as the Best Book on Natural and Applied Sciences.

Thus, the institution values the editorial work made in this volume, that gathers a selection of articles by the chemist and disseminator Fernando Sapiña, published in his gastronomy and science section of the magazine Mètode, also under the title of ‘La ciencia en la mesa’.

The main aim of the awards is to raise awareness of the university edition’s role in the transfer of Catalan knowledge, and the value and quality of the task developed by university publishers of Xarxa Vives. In addition, the awards seek to give prestige to the Catalan language in a university setting, in order to promote and normalize its use in the dissemination of knowledge.

A book to discover cooking and its science

‘La ciència a taula’, by Juli Peretó and edited by Mètode, gathers 42 articles by Fernando Sapiña on physical and chemical principles of food and its preparation, accompanied by a culinary recipe. These texts can be read independently, or by discovering the subtle threads between them through the texture, colour, taste, smell or culinary transformations of food. The book also shows Fernando Sapiña’s vocation for dissemination, with texts that are full of literary references and daily experiences, family and friendly anecdotes. A book to, in short, discover cooking and its science.

According to Martí Domínguez, director of Mètode and of the monograph collection, ‘this award is a beautiful tribute to the figure of Fernando Sapiña and to his informative work. The book combines very well the content with the form and it is a magnificent example of dissemination where the scientific concepts are accompanied by a practice, in this case, a recipe that the reader can cook. A very complete work’.

The collaboration of the artist Teresa Tomás in this publication is also important. In her interdisciplinary laboratory Palomita de maíz, Teresa Tomás experiments in projects where gastronomy hybridizes with her artistic work. The pictures on the cover and the back cover are hers. As for the graphic design and layout, it was in charge of José Luis Iniesta.

As it already occurred with his articles for the magazine, the book with Fernando Sapiña’s texts was very well received since it went on sale. Evidence of this is that there is already a second edition. Moreover, the book also has an English version, ‘Science at the table’.

The winning works, available at the stand of Xarxa Vives during the Setmana del Llibre en Català (module 2), will be presented in an act this Sunday, September 13th, at 11:00 a.m. on stage 1 of the Setmana (Moll de Fusta, Barcelona).

Xarxa Vives is a non-profit institution that represents and coordinates the joint action of 22 universities in higher education, culture and language. It leads services for universities with the aim of contributing to the process of construction and economic and social development of this cross-border university region of Mediterranean Europe.